On Friday 16th, the retention center’s prisoners, next to Lyon near the airport, began at midday a hunger strike.

On Thursday 15/08, in the evening, cops put off the light in the cells at 10pm. They clubbed the people who were inside and wounded several of them…A video came out from the retention center. Those images are rare and answer the detainees’ will to show what’s going on inside.

Lot of strength to them in the fight they’re leading and the suppression they’re enduringFire to the borders, to jails, to the retention centers which is both of them, and to this racist system of imprisonment ! 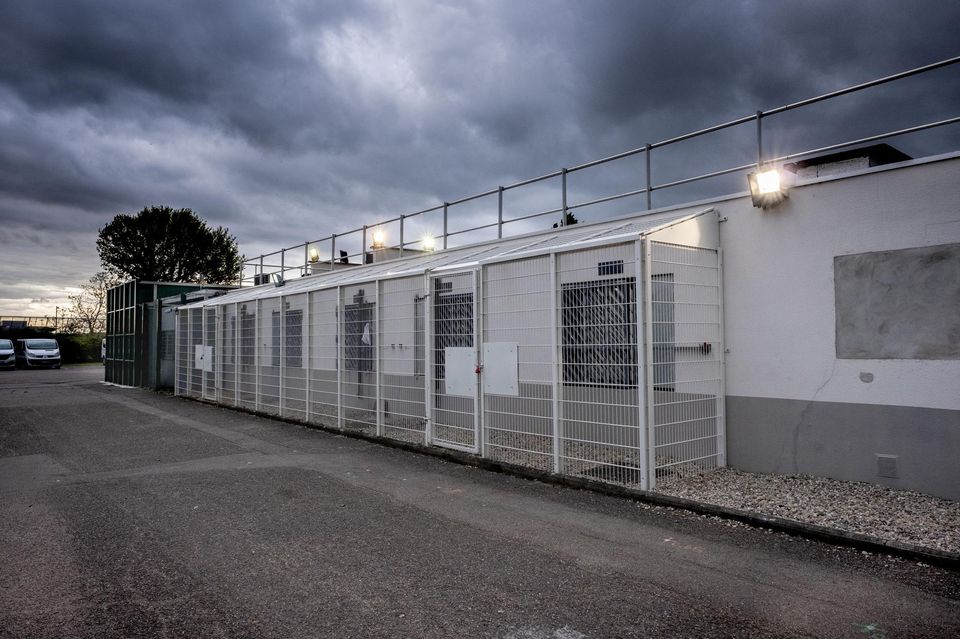 TODAY HUNGER STRIKE IN THE RETENTION CENTER OF LYON SAINT-EXUPERY

The retention center’s prisonners next to Lyon near the airport begun at midday an hunger stike in the blue and yellow side!

Yesterday evening, cops put off the light in the bedroom. They clubbed person inside.
Today the pain continu with massif tear gas and the enclossing in the courtyard.

Lot of strenght to them in the fight they began and the suppression they are enduring
Fire to the borders, to jails, to the retention center which is the both of them and to this racist system of imprisonnement !

So do you want to talk about what happened inside the center?

All the day you mean? Start from the morning ‘til the night?

So hum this time I’m coming in ramaddan you know, this is maybe a different time of life than normally days you know.
So, but, they wake up us at 10 o’clock on morning and they checking all the rooms, and they leave the bed down and everything is not like they, like how they found it before. So…
And then we go out through the hall here, and there is some people they are going for take the breakfast and after the breakfast they give them the pills, like the drugs pills, you know, like Valium, Rivotril like that. The police they giving the persons here. They giving the pill drugs! And because of that pills they’re fighting each other and they’re fighting with the police and everything you know.

But the rules here, if you want to ask something for your travel, for next travel, which destination they will send you, they don’t, they don’t wanna answer you! They live it like a surprise!
Er… Before one day or two days they’re coming to say that you have a travel tomorrow, early morning to some destination, you didn’t know it before, you know.
At least they should give us some information before like one week, like two weeks like that. Or make you choose you know. Do you understand what I mean?
You should have more time for the… before the travel you know! Before… Because you have to ask your friends, your family to bring your clothes back, your papers, your folders and everything like that! Not like a surprise after one day!
They say tomorrow, after tomorrow if you have a chance they will say after tomorrow…

Yeah yeah. It’s not always but sometimes… I will say, that’s happening sometimes you know.

What the people can do after it in order to have protection?

And do you want to talk about Forum Réfugiés?

Like the Forum is extra here you know, that’s extra for… for asking for nothing you know, hum. They tell if you don’t ask them. I ask them two, three times and the same answer « there is nothing new », « there is no news ».
And all people this all than me here. And they are asking the same questions. If you ask the Forum, they answer you, they say « no never ».
You should waiting.
That’s it.

Hum and do you saw people which wanted to talk to Forum about what happened with police inside?

Inside, nobody talking with the Forum you know of what’s happening inside.
Like yesterday, two person they are fighting each other you know. The police they coming and they… One police they… They kicking you know, they kick one guy from them you know. Yeah, they kick one and then they put him for three hours and they leave him out, you know, yesterday.

Three hours inside a room… Only in a room you know. It’s closed room.

Yeah yeah… And today his face is [inaudible] you know, because of the kick of from the police you know, they kick his face, you know, in his face. Yeah…

I have to say something about the rules here. It’s not like Europe you know. There is some people they’re having asile in other countries. So the rules they should ask him when they have asile for get him back. Not for his mother country you know.
Here the rule is, they changed it or I don’t know! They’re asking, the first one, they’re asking HIS mother country. They don’t ask the second country when they did have asile, or they have asile.
You know, this is a problem, when there is some people they have a problem inside…
Sorry [he’s caughing] because I’m fastening today you know.

I want to say, that world is for humanity, for all of us you know. I should choose when I wanna live, not them you know.
We can’t fighting for hiding the borders. There is no borders in the world.

And thanks a lot for this registration.